The Delphic maxims are a set of 147 aphorisms (pithy observations which contain general truths) inscribed at Delphi.

Originally, they were said to have been given by the Greek god Apollo’s Oracle at Delphi and were therefore attributed to Apollo himself.

The 5th century scholar Stobaeus later attributed them to the Seven Sages of Greece. Contemporary scholars, however, hold that their original authorship is uncertain and that ‘most likely they were popular proverbs, which tended later to be attributed to particular sages’.

Perhaps the most famous of these maxims is ‘know thyself,’ which was carved into the Temple of Apollo at Delphi. The specific order and wording of each maxim varies between different versions (and translations) of the text. 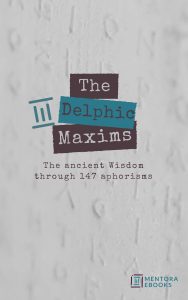 The app is currently in developmnet. Please come back soon! If you would like to be notified when it launches please enter your email below.

We use cookies to ensure that we give you the best experience on our website. If you continue to use this site we will assume that you are happy with it.OkRead more